Back to frozen pizza!

Remember the magloubeh pact that I made last month, well, in case you are wondering, it is still standing. However, and sadly enough, my first attempt at making magloubeh failed. I will spare you any gruesome images from my first magloubeh experiment but I will narrate the story of its making.

My first trial took place last evening. I attacked the kitchen right after work, around 5 PM. I dove in armed with the famous Arabic cookbook Alf Ba Al Tabekh along with tips and sage advice from both mother and sister. I did not follow the recipe religiously, deciding instead to add both eggplant and cauliflower instead of using only eggplant as the recipe dictates.

I cooked the chicken, fried the vegetables and stacked the ingredients in layers in a pan, which I left on the stove to cook for 40 minutes. All the while, the supportive husband was doing everything he could to assist me. He rushed to the store to purchase a Cidir (roughly that translates to "real big plate"), which is used for flipping the magloubeh over and ultimately serving it.

When I thought the cooking time was over, I called the husband to come flip the magloubeh. He dutifully obliged. Then came surprise! The bottom of the magloubeh — what constitutes the first layer — was blackened! Yes, oh my, the bottom was scorched.

Jeff reacted quickly, scraping the burnt part off and managing to salvage some edible magloubeh bits. We both stuck it out and ate the remainders. And yes, we are still in one piece. I have to admit I was extremely disappointed with this failed attempt, especially since I spent three hours in the kitchen hopeful I’d soon savor some bits of my favorite Arabic dish. The wonderful husband continued his support as we ate the salvaged parts morsels. "You are pretty close," he said. Yeah, yeah!

After relating this story to my Palestinian co-worker, his conclusion was that I did not use enough water while letting the pan simmer for that final fateful forty minutes. I think he might be right. If I remember correctly, I kept waiting for the rice, which constitutes the top layer, to cook before I turned off the burner. I think I waited too long. I could have saved the day by the simple addition of some water.

Ah well! Frankly, I do not know when I will try this again. I certainly need some time to recuperate. Back to frozen pizza! 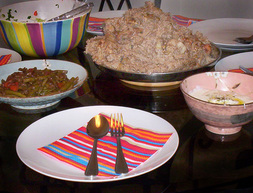 Thursday night was a special night. Beisan, whom I’m gonna start calling the "great cook," invited us over to try her wonderful magloubeh. Oh my God, it was divine. I don’t even remember when the last time was that I had magloubeh before Thursday. I could not believe my eyes when I saw this wonderful dish laid upon the table. Naturally, I attacked the dish, paying little attention to table manners or the people around me. I ate and ate until eternity.

The great cook, pleased with my gluttony, decided to send me home with even more magloubeh. It even tasted better when I had it at work for lunch Friday. That day I realized how much I miss Arabic food. Sadly, my cooking skills are somewhat limited. I can cook bamya and some other fairly easy American dishes like a few casseroles, chili and meat loaf.

But now I have a new challenge before me. I’m going to learn how to make magloubeh. Everybody assures me it is very easy. We’ll see. It is a challenge I’m excited to take. Still high on magloubeh, I decided to make a pact: I’m will not deprive my future children from the joy of magloubeh. I’m going to learn how to make it fantastically and pass it on into future Tynes generations. Beisan, thank you for your wonderful food and for reminding me how much I miss divine Arabic delicacies.

First dispatch from the new apartment

We just finished eating a meatloaf made by yours truly
and I must say it was very good. In spite of the lack of a few kitchen utensils, I
stuck it out and made my first meal in our new apartment. Okay, enough
self-admiration, let me talk a bit about our new place. We moved last week up
north into the DC-Metro region and we are loving it. Our apartment is located in Maryland and actually in the middle
of the forest, which makes for delightful, lush scenery every time we look out of
the window.

Deer and squirrels visit us every once in a while. This is something
very unique to my Jordanian eyes. Besides being lush, our neighborhood is so close to some major shopping areas in the heart of the city. It
is also worth noting that the city itself is very ethnically diverse and extremely
cosmopolitan. You find people from all over the world, not to mention the
diverse selection of food and restaurants. The apartment is also quite close to work, making my morning commute no longer than ten minutes. All in all, we are
quite content.

As for the settling in part, well, we are not there yet. We still
need to get some essential pieces of furniture and to unpack a few more boxes.
We have the basics, though. We’re getting there. I’ll post pictures of the place and neighborhood
when time allows. Meanwhile, it’s time to refill my plate with another slice of my superb
meatloaf.

Dinner and a movie

Last night the Tynes enjoyed this [click to enlarge it] for dinner.

The wonderful dish, called zesty roasted chicken and potatoes, was made by yours truly and believe me when I tell you it turned out fine. The recipe is available upon request. Yeah, yeah
I’m getting arrogant and I know it 😉

This fine meal was followed by the 1998 movie Living Out Loud, which proved to be very enjoyable. The film, starring Holly Hunter and Danny DeVito,
tells the story of a recently divorced woman who is trying to get over her ugly break-up while figuring out what she really wants in life. Have I ever mentioned that I really like Holly Hunter? The dialog was smart, refreshing and very original. I’m surprised I have never seen this movie before.

Ok, it is about time to embrace the day, but before I do I will leave you with some highlights from newswire:

We had an enjoyable evening last night. Amal came over and we cooked a Chinese dish with cashew nuts for dinner along with some banana bread for dessert. They both turned out very well. Following our brief dinner, we watched a Dutch documentary entitled Fairuz, We Hielden Zoveel Van Mekaar, or "Fairuz: When we loved each other so much." The documentary, which Amal worked on as a field producer, examines the Lebanese infatuation with the diva Fairuz, explaining how she provided the soundtrack to the lives of so many Lebanese during the civil war that shattered that country’s soul.

Those interviewed talked passionately about their attachment to Fairuz songs and how she helped shape their emotions and nationalism while growing up in a war weary world.

Naturally, the soundtrack of the movie was Fairuz songs, which did make enjoyable listening. But after watching the documentary I felt the urge to bring up a controversial topic in these parts: Fairuz overexposure. I know this might offend the many ardent Fairuz fans out there, but I really have had enough of her. Wherever you go — at least in Jordan — a sampling of Fairuz melodies is required. You hear her everywhere and I mean everywhere: The bus, the cab, on national TV, all radio stations, even your neighbor’s CD player.

When it is Christmas, we hear Fairuz singing Laileh Eid or "A festive night." When it it is snowing she chants Talj, Talj or "snow snow." When there is a Palestinian solidarity campaign we hear Ya qudos or "Oh, Jerusalem." There is a Fairuz song to suit every occasion.

It is just too much! I know most of her songs by heart but sometimes I wish they would just stop playing them! I don’t hate her beautiful melodies or her tantalizing voice; don’t get me wrong. I’m just suffering from Fairuz overload! I cannot allow myself to hear her songs anymore. I have had it! Enough!! It is about time for a new diva to step into the limelight.

Ok. I’m finished venting. Attack me if you will 😉