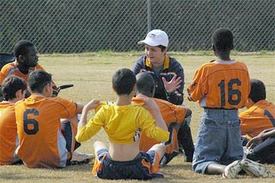 I recently read a very inspiring article about a female Jordanian female coach who started a soccer team in Georgia in 2004 for refugees in the US. Dubbed "Fugees," the soccer team’s success story grabbed global interest. According to press reports, there are plans to turn the story of her and her soccer team into a movie. Here is an excerpt from a UNHCR article:

Luma Mufleh grew up in Jordan and emigrated to the United States to attend college. In 2004, she started the Fugees, a soccer team for refugee youth in Clarkston, a small town in the southern US state of Georgia. The town has become the home of many refugees resettled there after fleeing persecution in places such as Afghanistan, Bosnia, Burundi, Congo, Gambia, Iraq, Kosovo, Liberia, Somalia and Sudan. Coaching for six seasons, she has brought together players from diverse backgrounds and worked to find support for her team. UNHCR’s pioneering ninemillion.org campaign, which promotes sport and education for refugee children, has been working with the Fugees for several months.

Here is another excerpt from a New York Times article.

Luma Mufleh, 31, says she was born to coach. She grew up in Amman, Jordan, in a Westernized family, and attended the American Community School, for American and European expatriates and a few well-to-do Jordanians. There, Muslim girls were free to play sports as boys did, and women were permitted to coach.

Her mentor was an American volleyball coach who demanded extreme loyalty and commitment. Ms. Mufleh picked up on a paradox. Though she claimed to dislike her coach, she wanted to play well for her. "For the majority of the time she coached me, I hated her," Ms. Mufleh said. "But she had our respect. Until then, I’d always played for me. I’d never played for a coach."

Ms. Mufleh attended college in the United States, in part because she felt women here had more opportunities. She went to Smith College, and after graduation moved to Atlanta. She soon found her first coaching job, as head of a 12-and-under girls soccer team through the local Y.M.C.A. On the field, Ms. Mufleh emulated her volleyball coach, an approach that did not always sit well with American parents. When she ordered her players to practice barefoot, to get a better feel for the soccer ball, a player’s mother objected on the grounds that her daughter could injure her toes. "This is how I run my practice," Ms. Mufleh told her. "If she’s not going to do it, she’s not going to play."

In this day and time, we need more Jordan-related stories like this and less like this one.

I just read on Tamara’s blog about two Jordanian females — who happen to be twins — that are currently in Alaska training for their big trip to Mount Everest. Here is an excerpt:

The Jordanian runners Dima and Lama Hattab have just joined a training camp on 9 February 2007 in Alaska supported by King Abdullah II Fund for Development, this training camp will be followed by chain of other similar ones in order to climb Everest summit in 2008.

"We have our dream to accomplish many distinguished sporty achievements not only locally or in the Arab World but also internationally to present the competitive Jordanian sport, we are honored and humbled by the great support of King Abdullah II Fund for Development to be the first initiative to help us in our mission to be the first Arab female twins climb the Everest together." Lama Hattab said.

"Alaska region, which is a state of the United States of America located in the extreme northwest portion of North America, is considered a perfect place to learn how to live in cold climates since the winter there is a very long dark one, temperatures often are Sub-zero. The ten days training organized by Alaska Ultra Sport."

"The sisters have sent an electronic message advised the local press that they started the training by sleeping in the tent surrounded by snow in 15-CËš tracking very hard diet system." Dima Hattab added.

This is exciting news. I really wish them all the best. Click here to find more information on the twins and their trek. Hat tip: [Exciting Life]

A dip in the West Virginia whitewater 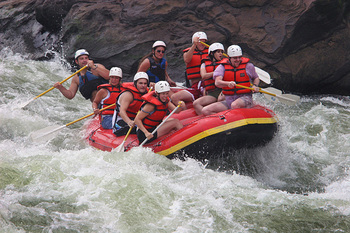 I think this picture speaks for itself [Yes, it enlarges on click]. Last weekend was simply out of this world. I never thought I would do something like this in my lifetime … ever! It was something I used to see in the movies. But after some planning and encouragement from the husband, I decided to embark on my very first whitewater rafting experience on one of the oldest rivers in the world, the New River in West Virginia.

I have to admit, though, I was dreading it. I was so worried the night before that I stayed awake almost all night. I kept thinking I would end up clinging to a tree after the boat flipped, just like in the movies. But I didn’t! With our friends: Sarah, Elliot,the husband and me, the whole experience was absolutely exhilarating. I would do it again in a heartbeat. What a weekend! 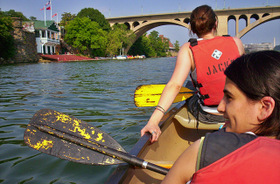 As someone who spent most of her life in Amman, I have never been much of an outdoorsy person. It is simple, Amman is not really designed for the outdoors. If you venture north or south you can get the chance to do some hiking here and there, but other than that the choices are pretty limited. As a result, I turned into someone who dreads outdoors sports activities largely because of my lack of experience and general overall clumsiness. The most exhausting outdoor endeavor I ever undertook in the out of doors was skiing in Farraya, Lebanon more than two years ago. Yes I had a great time, but the poor husband spent over four hours teaching me how to ski and I still didn’t really get it. 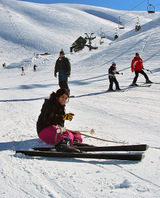 It took me forever to learn the basic steps of skiing and I had more than my share of falls. In addition, I made sure to inform everyone who was skiing in Farraya that day of my presence
by bumping into them and making them lose their balance and plunge directly into
the snow.
I must admit, though, I had a great time despite all the embarrassment I experienced. Yesterday marked another day of outdoor activity for me. As it happened to be the Memorial Day holiday, we decided to go to the Potomac River with our friend euroarabe.

This time the outdoors was canoeing — a first for me. I was relegated to the middle of the boat with the husband and eurorarabe occupying the back (or sternman) and the front (bowman) positions respectively. I have to admit, I did not have to do much rowing, as the bulk of the work was assigned primarily to the front and the back-end rowers. However, I did get hold of a paddle and decided to help out. I thought it was pretty impressive that I did not manage to flip the boat, as I’d been dreading. Somehow I managed to stay balanced, against all odds.

Cruising the Potomac River and looking over at the city of Washington was simply stunning. The weather was also perfect and everyone around us seemed to be enjoying their time on such a warm summer day. Would I do it again? In a heart beat.

Photo of the day

Getting a baseball education 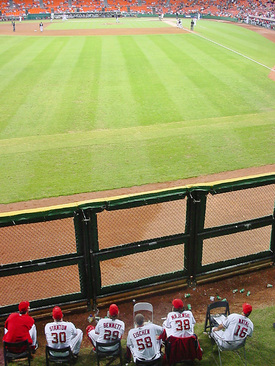 As part of a new subscriber promotion, our cable company, Comcast, decided to give us free tickets for a baseball game between the DC Nationals and the Florida Marlins. So the other day we made our way to RFK, the stadium for DC’s Nationals for me to get an education watching this all-American experience live. I must admit, the overall atmosphere was exhilarating with live music and vendors wandering here and there shouting out names of different kinds of beer and other merchandise.

It was also fascinating to see the excitement of a crowd that came from all walks of life. As to the game itself, well, frankly, I really did not get that much of what was going on. Although the husband spent most of the duration of the game explaining the rules to me, I only managed to come away with the following: there is a guy who hits the ball and then runs from one base to the other before someone "tags" him out!

While it was very thrilling to watch baseball live, I thought the game dragged an eternity, as it lasted over three hours. I also felt it lacked the continual excitement provided by some of my favorite sports like football (not American) or basketball. But all in all the experience was memorable and well worth the time and the effort. Go Nationals!