Hypnotized by the ‘Sprinting Gazelle’ 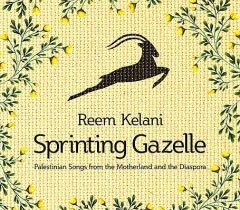 Among the many wonderful gifts that our friends Luma and Shawn gave us during their short, but very sweet visit this weekend was a pile of awesome new music. The album that grabbed my attention immediately was Reem Kilani’s Sprinting Gazelle.

I have been listening to this debut album since last night and this is my assessment: it is the best Arabic music I have heard in a very, very long time. What makes it unique is Kelani’s tantalizing voice and the fact that the music is based upon Palestinian folk songs that deal with every day issues, like building a house with a garden around it.

Kelani kicks off her music with the gripping Mawwal, which succeeded in transporting this listener to a different land during a different era right from the very first note. Goose bumps come later on. On more than one occasion, I found myself dancing and swaying to her tunes all by myself in our living room. Yes, it is that hypnotic. Artists like Kelani are the ones who rekindle my interest in Arabic music, which is currently plagued by trashy pop that is so off-putting.

Here is what one reviewer on Amazon thought of the album:

Think Blues of the finest nuance and transpose its disposition first to Palestine and the contingent necessity for many of its natives to relocate. This music is party to the powerful response to a tragedy. That said, Sprinting Gazelle, by Reen Kelani, is one of the most exhilerating [sic] musical experiences I’ve encountered. So brilliantly performed, it’s impossible to believe that this is a debut effort. The rating system is inadequate to do it justice. Her singing is up there with Alim Qasimov, Dimi Mint Abba, and Aster Aweke. Emotionally, her collection is more diverse than any issued by the aforementioned luminaries. For this, she is superbly abetted by musicians and production of uncanny majesty. Even were she never to produce more recorded work, her position on the top deck of cherished CDs is assured.

Luma paid a hefty sum to get her hands on this album, which for some reason is not widely available in the US. "It was worth every cent," Luma told me. She is right. It is definitely worth it.