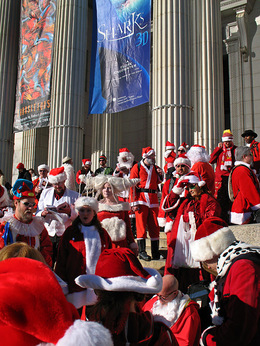 While driving around the National Mall in DC last weekend, we came across something that resembled some sort of a Santa Convention. What we saw was more than two dozen Santas gathered in front of the entrance to the Smithsonian National History Museum. The Santas were not doing anything special besides just hanging out.

My mother-in-law and I approached the congregation and asked one of the Santas about the reason for this mammoth gathering. His reply was simple: "It’s Christmas!" Good answer.

A few days later, I was reading John and Jenny’s blog when I realized that they too had come across a similar scene in Seattle. After following the link on their blog, I discovered that what we had stumbled upon in DC was a special group that goes by the name Santarchy and/or Santacon. This is how they describe themselves:

Every December for the last 13 years, Cacophonous Santas have been visiting cities around the world, engaging in a bit of Santarchy as part of the annual Santacon events. It all started back in 1994 when several dozen Cheap Suit Santas paid a visit to downtown San Francisco for a night of Kringle Kaos. Things have reached Critical Xmas and Santarchy is now a global phenomenon. You’d better watch out! Santa’s coming to town! 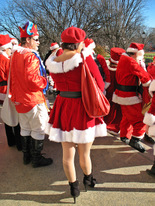 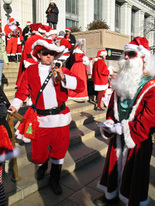 In more Santa-related sightings, apparently globally there are a number of mass Santa convocations. Some suggest it is a sure sign of the apocalypse. These images document a gathering of Santas, called "Sinister Santas," in Moscow. This article suggests something more than Christmas merriment afoot: "Its purpose and appearance had been painstakingly created to appear benign. Few of the 70,000 or so who gathered were older than teenagers and their uniforms were so incongruous as to be unthreatening … according to Russia’s liberal democrats, scenes like this are less a display of benevolence than a show of force … As the youngsters swayed … a voice boomed out from the loudspeakers exhorting them to reinvent Russia’s lost glory. "Let the miracle happen," the voice cried out. "Let heart reach out to heart so our country can rise once more."