4th of July in the nation’s capital 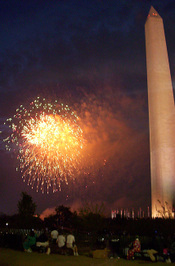 Right after watching the out-of-this world World Cup match between Italy and Germany, we jumped on the Metro and made our way down to the National Mall to celebrate Independence Day along with hundreds of thousands (estimates of 400,000) of people that flocked to the nation’s capital.

As expected, this once-a-year mammoth event was extremely enjoyable. Festivities were in full swing all over the mall. There were musical concerts, shows and even a Hare Krishna performance. We also managed to get a glimpse of Vanessa Williams, Jason Alexander — who played George on Seinfeld — and Elmo (the infamous Sesame Street puppet) after walking down to the Capitol building where the country’s main 4th of July concert took place.

Watching fireworks from the base of the Washington Monument made for a memorable sight. The cornucopia of colors coupled with the impact of the forceful explosions was simply breathtaking. Happy 4th of July everyone!