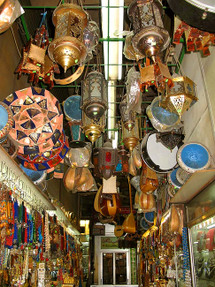 In my pursuit of the most authentic Jordanian souvenirs for gifts to friends and family in the US, I decided to venture into downtown Amman, or Al-Balad. I was thrilled to find that downtown is still its same old self, so vibrant and full of life. The scenes, the smells and the sounds were just as exhilarating as I have always remembered them. Also, the familiar offbeat characters that I used to see wandering about on the streets of Al-Balad — including a self-assigned traffic controller — still occupy their prime places.

As for my shopping spree, it was loads of fun. It reminded me how bargaining downtown can prove so tremendously entertaining, particularly when accompanied by my mother: the master bargainer. She is one of those that when she finds an item she likes, will bargain for eternity, but if she’s not satisfied with the final outcome of the deal will leave the store. Eventually, vendors follow her to the street and offer her the desired price. On this particular trip I was merely a voyeur, watching from afar as the transactions took place. I have to admit, I don’t have the requisite bargaining skills.

While taking random pictures of downtown, an old man wearing a traditional headscarf, or hatta, stopped me and asked me to interview him for "the piece that I was working on." It took me a while to explain to him that I was taking pictures merely for personal use and not for any journalistic endeavor. He was disappointed. The huge smile that he had on his face when he first saw me faded, as he turned and walked away without saying another word. I should have mentioned the blog. I might have made his day. My bad!

The shopping adventure ended with a cab ride home. Our taxi driver was so animated. He seemed to be amused by the fact that I was snapping photos during our journey. He stopped the car on a number of occasions to allow me to take "the perfect" shot. "Here. Here, you can take a great photo from here," he kept saying until we finally left the downtown. What a sweet, sweet guy!