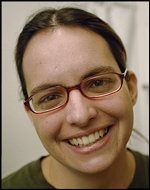 The Washington Post talked with Jill soon after her release, quoting her as saying that her orderal felt “like falling off a cliff for three months." They also ran a picture [from Getty Images] of Jill right after she was freed. She looks healthy and certainly happy to be free. Here are some excerpts from the Washington Post feature that ran today.

BAGHDAD, March 30 — Jill Carroll wondered from day to day whether she would grow old or die a hostage. "It was like falling off a cliff for three months, waiting to hit the ground," the 28-year-old American reporter said Thursday after being released by her kidnappers. A shuffle from car to street to the branch office of a Sunni Arab political party and then to its headquarters brought Carroll to freedom on a beautiful spring day in Baghdad.

I’m really ecstatic and grateful that our prayers have been answered. I can’t wait to see Jill, hug her and never let her go. Meanwhile, I’m off to Seattle in a few hours to attend a family wedding. I guess today I have two reasons to celebrate: A blessed matrimony, and a friend’s long-awaited freedom realized. Life can’t get any better. Thank you God.