On pins and needles 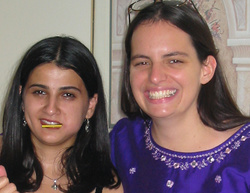 It’s true, the deadline has passed with no word on Jill’s fate, but I remain very hopeful, as efforts to secure her release continue non-stop.

As the clock keeps ticking, I’m on pins and needles. The wait is really wearing me down both physically and emotionally. I can’t imagine how hard it must be on her family. I’m unable to sleep through the night, waking up every few hours to check my phone for new text messages or missed calls. Jill has become an integral part of my dream life. Fortunately, most of the dreams are positive, with me talking to her face-to-face and discussing her ordeal.

I was glad to see over the weekend that the Council of American Islamic Relations (CAIR) had sent a delegation all the way to Baghdad as part of their efforts to free Jill. I believe this could have a huge impact. CAIR Executive Director Nihad Awad said:

We
are the only people who have come from outside of Iraq to call for
Jill’s release, and we are very hopeful they will hear our message on
behalf of American Muslims … Harming her will do no good at all. The
only way is to release her.

I’m also encouraged by the sheer volume of good wishes and prayers being put out there for my dear friend. Some of those prayers are coming from Amman, Jordan, where my mom and all her friends are praying for Jill’s release. Everyone that Jill touched remembers her sweetness and open, honest character. Such a mobilization of prayer and good will can only bring positive things. God, please bring her home safely.

UPDATE: The CSM has done a bit of a round-up on things with two items particularly catching my eye. First, the director of London’s Islamic Observation Center, Yasser al-Sirri, called on the group that it appears has Jill, the so-called Brigades of Vengeance, to release her rather than tarnish the image of Islam.
Second, Iraq’s Justice Ministry continues to say that it expects the release of six of the nine Iraqi women prisoners this week, despite Coalition comments to the contrary, saying:
"The Iraqi detainees will be released within a week from today." All that said, the article closes with Reuters disturbing report of U.S. forces blowing off the front door of an Iraqi family and dragging one family member off for questioning.