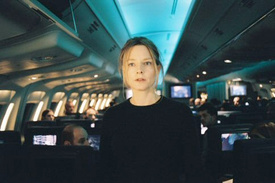 Since subscribing to Netflix, our trips to the local movie theater have grown scarce, amounting to a visit a month — a huge cut from the frequent visits during our Doha days. I guess having access to a huge library of foreign, independent and mainstream movies makes you think twice before spending extra dough on a theater movie of unknown quality.

This past Sunday we made our monthly theater pilgrimage to our neighborhood Regal theater to watch the thriller Flight Plan. The primary reason for choosing this flick was Jodi Foster since both the husband and I are big fans. The movie was okay, but holes in the script made me feel it could have been better. Foster’s performance was powerful but the plot needed some tweaking.

One interesting plot point involved Foster attacking some Arab businessmen on the plane because she thought they were involved in the disappearance of her daughter. I guess in this post 9/11 era you can’t make a movie about air travel without inserting some Arab elements. Overall, the movie was not bad but I’m not sure it was worth a theater trip. I give it 6/10.

Still on the movie topic, here are some thoughts about two movies we saw recently and enjoyed:

Crash: My personal take on this movie: it is simply brilliant. It tackles the issue of stereotyping and racism in the post 9/11 era. The focus is not entirely on Muslims or Arabs, but expanded to include the racism inflicted upon other US minorities like Hispanics, Asians and African Americans. It is a very well-made film with a great storyline and a powerful message. Very highly recommended. 9/10

The Sea Inside (El Mar a Dentro): A top-notch film about the controversial issue of euthanasia. Based on a true story, the film explores one man’s’s desire to end his life after 26 years of living as a quadriplegic. The visuals were stunning as were the the cast’s performances. However, the movie was a downer. It depressed me to no end. This is not recommend for those with feeble hearts. 8/10

That wraps up my movie babblings for today. Stay tuned for more movie talk in the near future.