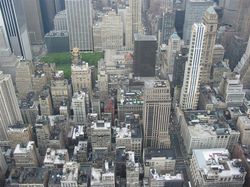 Sitting here in Jeff’s old room in his hometown of Virginia, I have a myriad of thoughts dancing around in my head. I guess, in a way, I’m just trying to grasp what I saw and experienced in the past three days, which constituted one of the more exciting and eventful times of my life. I have so many stories to tell and observations to spell out; however I will share what I think were the ones with the most impact.

When we first landed in JFK airport in New York, I was extremely tired, jet-lagged and very agitated. I was a bit worried about the immigration procedures that I had to go through at the airport as this was my first visit to the US. I approached the counter and told the officer that I was a new immigrant while pointing to all the paper work that I was carrying around. He looked at me and said with a smile "Congratulations." That was an ice-breaker and extremely welcoming. I never thought I would be greeted in this very amicable manner. That was my very first introduction to the United States and what a pleasant one it was. 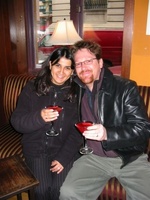 For the past three days I have been experiencing a very strong feeling of Déjà vu. Everything around me looked and felt very familiar. In a way I felt as if I was re-experiencing some sort of a past life. Of course the only explanation for this is the one and only Hollywood. I have seen so many American movies in my lifetime, something that made this country and its people very close to my heart. It was freaky in a way but a great example of the power of the imagery.

While sitting in a diner in Times Square, enjoying a New York burger and thinking about how far I was from home, an image popped up on the TV inside the restaurant that managed to ruin my bliss at that time. It was a picture of the one and only Zarqawai. I couldn’t believe it. There I was in New York, so far from all the craziness in my part of the globe, but still haunted by this bloodthirsty lunatic who happens to hold the same type of passport I carry.

At that moment, I just wanted to hide, especially after hearing the infamous sentence: "the Jordanian-born terrorist." But instead of hiding, I chose to continue eating my burger pretending that I was just another New Yorker on my lunch-break. It worked; no one around me noticed my deep sense of shame.

A piece of advice to any one visiting New York: Don’t miss the Blue Man Group show. It was — in every sense — out of this world. It was a clever two-hour performance of fantasy, music and artistic genius. Without a doubt, it was the best performance I have seen in the entire 28 years of my life; simply breathtaking!

That is it for now. More thoughts are to come, as time allows.