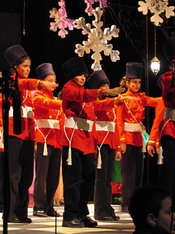 So I’m home in Jordan and life couldn’t be better. I missed my family a great deal and being with them again means the world to me. One of the many good things about being here now is the cold weather. Yes, I missed that feeling. Last night it was 1 or 2 degrees Celsius (Back in Doha it was 20 – see the weather pixie below). I was freezing but I loved it, naturally, after over a year of living in the desert. 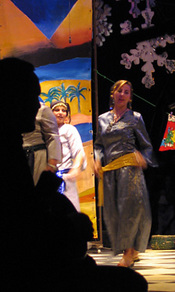 As soon as we got home we were greeted by mom’s delicious delicacies. God I missed her food. The dinner was followed by lots of chatting and catching up and playing with Amy and Jessica who get cuter by the day! They were so excited by the chocolate and gum we brought that they were bouncing all over the place with their mouth’s packed with sugary sweets.

After eating, and chilling a bit, we decided to go to the YWCA’s Christmas concert. Tania is playing in the choir’s band and managed to get us tickets for the event. We bundled up and headed to the concert, held at Al-Hussein Cultural Center in Ras Al-Ein.

This year’s concert had an international theme, as carols were performed in different languages and the story was presented via the journey of young Santa’s helpers that travel the world to try in search of a key that will grant them access to the city of Bethlehem, closed by an Israeli checkpoint. It was great fun.

I’m including some pictures [click for englargements] and maybe later some video of the event when bandwidth allows (a first for this blog if we can make it happen) to give you some idea of the atmosphere of the concert. Overall, I’m ecstatic to be back in Jordan and really looking forward to every single minute of the upcoming two weeks!