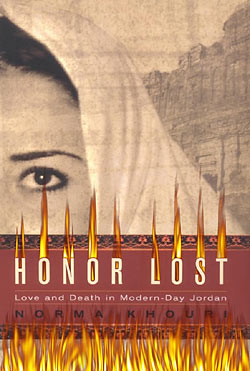 At last! The truth is coming out regarding the now clearly fictional book "Honor Lost," whose author narrates an alleged "true story" of her friend’s murder at the hands of her family because she, a young Muslim woman, was dating a Christian guy.

According to a Jordan Times article by Rana Husseini (a women’s issues reporter from whom some of the information for the tale was gleaned without permission), the book is the fabrication of an author writing under the name Norma Khouri, a name that now appears to be fictitious itself.

The article addresses a number of false claims by Khouri, including that she had to flee Jordan to Greece and then Australia after the incident, fearing for her life.

I remember last year when I first heard about the book. I was so furious I couldn’t sleep for days. What really annoyed me was how she fabricated her portrayals of Jordanian women and their male counterparts.

One example of these falsehoods was that women in Jordan aren’t allowed to eat at the same table with men. Instead, she claimed, they waited until after the men had their fill, staying behind to eat the leftovers. What a load of crap!

Another thing that infuriated me was how the author claimed Jordanian Christians pay some sort of a tax, called Jizyeh, to be able to live in Jordan! That is also a load of crap! I’m a Jordanian Christian and neither I nor any member of my family has ever paid Jizyeh! And we’ve been here all along, for generations and generations.

According to Rana’s article, a series of exposés by the literary editor of the Sydney Morning Herald, Malcolm Knox, in cooperation with the Jordanian National Commission for Women have exposed Khouri’s tale as fiction.

By Rana Husseini
AMMAN — The author of a best-selling book who claimed she was forced to flee her native Jordan in fear for her life may now lose her right to live in Australia following allegations that she made up her past.

Norma Khouri, 34, wrote a book that was published in January last year under the title "Honour Lost" in the US and in Australia under the title "Forbidden Love." In the book, Khouri describes the murder of her lifelong friend who she says was murdered by her father after the family discovered she was engaged in a secret affair. According to Khouri, she herself was then forced to flee Jordan under threat for defending her friend.

But a series of exposes by the literary editor of the Sydney Morning Herald, Malcolm Knox, in cooperation with the Jordanian National Commission for Women (JNCW), claim that Khouri’s story is a total fabrication. The 18-month investigation by Knox and the JNCW also indicated that Khouri’s book contains over 70 factual errors in terms of geography, Arabic language, honour killings, locations, history and religion. It also contains over 40 erroneous statements in relation to Muslims and Arabs in general.

Khouri claimed in her book that she was born into a conservative Christian family and that she befriended Dalia, who comes from a conservative Muslim family, when they were both children.

Khouri wrote that in their 20s, the two girls opened a unisex hair saloon named N & D’s in Jabal Hussein in 1990 — one of Khouri’s major factual errors since such saloons do not exist in Jordan and are forbidden to operate by law. Khouri claimed that through this saloon, her best friend Dalia began to engage in a secret relationship with a Christian army officer, and that she was later killed by her family after the affair was discovered.

Khouri described how she was smuggled out of Jordan and wrote her book in Greece in 2000. She later moved to Australia, where she now lives in hiding in Queensland, according to the Herald. Khouri’s book has sold over 250,000 copies in over 15 countries, including 200,000 in Australia alone.

Secretary General of the JNCW Amal Sabbagh, who handled the majority of the investigations, said the organisation first sent letters of objection to the publishers in the US (Simon & Schuster) and Australia (Random House) in September 2003.

"JNCW’s request was to withdraw the books from the market and stamp them as fiction before they are put on the bookshelves again," Sabbagh told The Jordan Times.

"The US publishers told us in a letter that Norma [Khouri] had the right to express herself and they stood by her story," Sabbagh added.

Sabbagh explained that the publishers in Australia, "sent a response to our letter from Norma which totally blew the cover more because it made it even more obvious that Khouri wasn’t fully aware of the situation in Jordan.

Khouri attempted to evade the main issues detailed in the letter and accused the JNCW of merely seeking to defend Jordan’s reputation and neglecting the plight of Jordanian women."

But Sabbagh explained that the JNCW and all of Jordan, government and civil society, freely admit the existence of honour crimes in the Kingdom and that there have been several efforts exerted towards ending them.

“We refuse to have Jordanian women portrayed in the humiliating way that Norma Khouri portrayed them," Sabbagh stressed.

Annually, around 20 women are reported killed in Jordan in so-called honour crimes. This year, the total number of reportedly women murdered in similar crimes stands at 10.

However, one of the major factual errors in Khouri’s book is her claim that the number of women reportedly killed in Jordan each year is around 2,550.

Khouri wrote on page 196 of the American edition: "In 1998, the UN conservatively estimated that over 5,000 women are killed for reasons of honour every year, 1,000 of those in Pakistan and Afghanistan, around 400 in Yemen, 50 in Lebanon, 1000 in Egypt, and the rest, about 2,550, in the West Bank, Gaza and Jordan. Considering the fact that Jordanian population is larger than populations of the West Bank and Gaza combined, it’s easy to conclude that the majority of these 2,550 lived in Jordan."

Sabbagh said the JNCW sent a second letter in December 2003 to both publishing houses urging them to look into the matter again, but they both refused.

"The fact that we were ignored made the JNCW decide to seek different means of convincing the publishers that the book was totally fictitious since they did not respond to us and refused to change the category of the book," Sabbagh explained.

The JNCW requested that the Australian publishers change the category from non-fiction to fiction and that the US edition be changed from social science to fiction.

"The JNCW started investigating the background of Khouri and found out her real family name which made it easier to discover more details about her," Sabbagh said.

Sabbagh refused to reveal her real family name "out of respect for other family members living in Jordan."

According to the Herald, Khouri only lived in Jordan until she was three years old and has been living in the US from 1973 to 2000, a fact she has managed to conceal from her publishers. The Herald states that she disappeared from the US in 2000 and her family have not heard from her since.

The publishers wrote back in December 2003 remaining adamant that they still stood by Khouri’s story, according to Sabbagh.

Both Knox and the JNCW believe that good teamwork led to these results and Sabbagh commended the personal effort exerted by Knox, "personally I believe that Knox is a very ethical journalist who did all this in search of the truth."

The Herald reported on Saturday that its report that Khouri made up her past and facts in the book have cast doubt on her residency status in Australia.

It quoted a spokesman for the Department of Immigration and Multicultural and Indigenous Affairs, who said yesterday that while the Privacy Act prevented them from talking about an individual case, when such situations arose, "the department examines the circumstances of what has taken place."

As for Khouri, she denies the allegations that her book is a fabrication and in a telephone conversation with Knox last week stated that "I stand by my story and I’m gathering all the documents to prove I lived in Jordan and I am the person I say I am."

Both Random House Australia and her agent in New York on Saturday expressed concern and urged Khouri to produce evidence as soon as possible that she "did not make the story up."

A second book, A Matter Of Honour, said to be a sequel to Forbidden Love, is due out in November, according to the Herald.

Page 2: Khouri writes that Jordan is bordered by many countries and mentions Lebanon, Egypt and Kuwait, among others. These countries do not share a border with Jordan.

Page 62: Khouri states: "According to Islamic law, non-Muslims must pay the jizyah, a poll tax, in order to protect their rights." This is a totally false statement. Christians have the same rights as Muslims and do not pay any extra taxes.

Page 185: Khouri writes: "She would have no coffin." This is a factually inaccurate statement. Muslims do not bury their dead in coffins regardless of the reason for their death, rather the corpse is wrapped in white shrouds then buried.

Page 142: Khouri writes: "…He instructed the nurse to take me to the morgue." Both the director of the National Institute of Forensic Medicine and the administrative director of Palestine Hospital said that private hospitals are not allowed to receive murder victims

Page 156: Khouri writes: "If the court agreed that her actions warranted an honour killing, then her father would receive the male judges’ and jurors’ respect and support …" This is factually incorrect. There is no jury in the Jordanian legal system, therefore no jurors. The Criminal Court is comprised of a panel of three judges and no jurors.

Page 5: Khouri mentions that she opened a unisex saloon in Jordan under the name N&D Unisex Saloon in Jabal Hussein. Unisex saloons are not allowed by law to operate in Jordan.

Page 191: Khouri writes: "As he asked, he drew a 50 dinar note from his wallet." The fifty dinar bills were introduced in early 2000 and not in 1996 when the crime allegedly occurred.