A peek inside Karak Castle 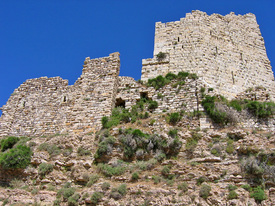 I’d been meaning to write about our recent visit to Karak Castle earlier but I have fallen ill for some reason. I have just gathered strength enough to last me a bit, so I thought I’d jot down a quick post before this nasty flu puts me back in bed. Still under the influence of the movie "Kingdom of Heaven," we decided to take a one-day trip to south Jordan to visit Karak Castle, which was featured prominently in this Hollywood production.

We had loads of fun. Getting there was part of the adventure, as we took a bus from Wehdat bus stop all the way to Karak. The trip was smooth, but I was suffocated by all the smoking on the bus. Apparently, Jordan’s public transport is still not smoke-free, despite laws saying it should be. When we arrived in Karak, we took a cab right to the castle gate. I learned on the Karak cab drive that taxi drivers in the city don’t follow the meter, although it’s right there in the cab. They just set their own rate.

When we arrived at the castle, we were surprised by how humongous it is. According to a tour guide I chatted with briefly, the castle is the second largest in the Middle East (no, I didn’t ask him about the first). We spent some three hours or so discovering all the nooks and crannies of this historic outpost all the while taking pictures, loads of them [An album of photos is up with descriptions of the site]. We learned that the castle was where Crusader leader Reynold de Chatellion hung his helmet. 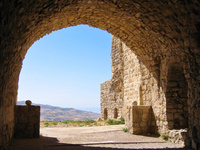 I have to admit, I owe this sudden historic interest in this castle to the one and only Hollywood. Had I not seen this movie I would not have bothered to take this trip.

The castle’s museum was really top-notch, detailing the history of not only the castle itself but all of Jordan through various historic eras as well. I have to say I was impressed. We were also surprised at the number of tourists there, the majority of whom appeared European. This made me wonder: Are the efforts of the ministry of tourism finally paying off? Is the tourist trade actually on the rise? Or am I being too optimistic in speculating that the tourists we saw were prompted to visit the site following the movie’s release? Regardless, the trip was really fun. We had a blast!