Snapshot: Deer in my backyard

One of the things that I enjoy a great deal about living in the suburbs, away from the hustle and bustle of the city, is the easy access to nature and wildlife. Last week, while I was sipping my morning coffee and flipping through the weekend edition of the Washington Post, I glanced at our backyard and low and behold there were deer, four of them, right outside my dining room.

They just wandered around, nibbled on some of our trees, and chilled for a while until they decided it was time to move on. Such beautiful animals, I tell you! This is a scene that is really worth my daily commute back and forth to work. Long live the suburbs!

Grabbing our piece of the American dream 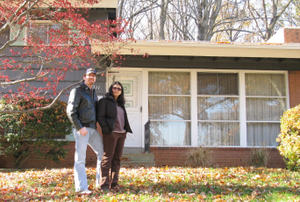 One of the reasons I’ve been quiet during the past few months is because the husband and I have been working hard to achieve this. Yes. We made it, finally. We are proud homeowners.

We are elated that after four years of marriage, we now own a house that we plan to keep for a while. While Jeff is already planning the design of his "TV room," where he can put all his toys to good use, I’m busy mapping out the dining room in anticipation of the many, many parties we plan to host.

If anyone has plans to visit the DC metro area anytime soon, remember that our house is always open. And yes, we finally have a guest room.

For the past few months, the husband and I have been doing a great deal of reading and research on how to achieve the ultimate American dream: buying our first house. Traveling this path has been both exciting and stressful. In the interim, I had to learn a whole new language: The language of the American real estate. This language includes terms like PMI, seller contribution, closing costs, interest-only, buyer’s agent, open house, appraisal and others.

I have been so stressed out about the whole process that I woke up yesterday and found one single white hair on my head. The last time I had a single white hair was four years ago when I was preparing for my wedding, which was followed by a new job in a new country. It goes without saying that the white hair has made me even more stressed out. In addition to thinking about the best way to pursue the American dream, I’m now thinking about aging and the deterioration of my own body. Sigh! If only life could be less stressful. 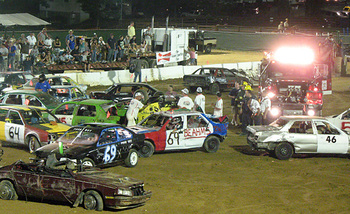 Last weekend I learned about (and experienced) the American pastime dubbed: Demolition Derby. Thanks to Leiloulta and spouse we made our way to the Montgomery County Fair, which featured the derby among other things.

I have to admit that I was quite baffled watching this demolition take place to the cheers of nearly a thousand spectators. So what is this event exactly? It is a way of getting rid of nearly-dead vehicles by smashing them into other almost-dead vehicles until they die, to the applause of an excited crowd. The winner is the person whose car continues running after all others die.

The testosterone-fueled event was fascinating for me. It’s not that I enjoy destruction or the sight of dead cars. I was intrigued by how my husband along with other male friends in our group were sucked into the event. There is something about cars and demolition that makes such an event as enjoyable to men as, let’s say, tanning on the beach with a PiÃ±a Colada is for women. I could not find it in myself to cheer or stomp with the animated crowd, as they did when one car flipped over and a firetruck had to intervene. I got agitated and kept wondering if the driver was okay. Somehow the driver came out unscathed and kept on driving.

Would I attend such an event again? I don’t think so. Been there, done that. Did I regret seeing it? Not at all. It was quite an experience seeing up-close-and-personal how men and women’s interests can be such oceans apart. When I asked my parents, who had accompanied us, what they thought of the event, they simply said: "Crazy!" Crazy indeed.

Snapshot: Frogs at the Nataional Aquarium