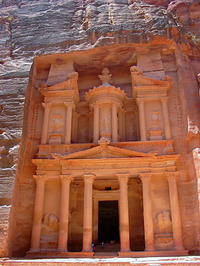 The Nabataean city of Petra in Jordan has been short-listed for the new seven wonders of the world. The original list included 200 sites; the short-list now stands at 21. The vote is being organized by a non-profit Swiss foundation called New7Wonders, which specializes in the preservation, restoration and promotion of monuments. The results of the voting will be announced on July 7, 2007, in Lisbon. Here’s how 7wonders describes Petra:

On the edge of the Arabian Desert, nestled away in the mountains south of the Dead Sea, Petra was the glittering capital of the Nabataean empire of King Aretas IV (9 B.C. to 40 A.D.). Masters of water technology, the Nabataeans provided their city with great tunnel constructions and water chambers. A theater, modeled on Greek-Roman prototypes, had space for an audience of 4,000. Today, the Palace Tombs of Petra, with the 42-meter-high Hellenistic temple facade on the El-Deir Monastery, are impressive examples of Middle Eastern culture.

This is so wonderful. I just voted on-line. As part of the voting system you have to choose seven sites. In addition to Petra, I voted for Hagia Sophia and Alhambra, two places I visited and fell in love with as well. Come on guys, vote for Petra now.

The picture in this post was taken by the super-talented husband. It’s part of a Jordan photo album that can be viewed here.
Hat tip: [Jordanblogger]