The ramifications of supporting Hillary 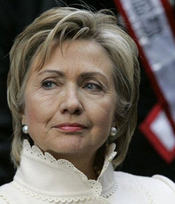 I’m fascinated by the amount of angry messages and "Wall posts" I’m getting on my Facebook page from my friends these days after I announced that I’m supporting Hillary for president (for reasons that I do not wish to delve into now). Most of the angry messages came from my Jordanian/Arab friends who made sure to tell me that they do not agree with me. Here are some examples:

Come on now, she flip flops, she is owned by the Jewish lobby and she has a one sided view of the Arab Israeli conflict. She is no Bill.

Why Hillary she is a devil wearing Prada…Because she is a woman ?!!

I am aware that Hillary is a pretty divisive choice but I never realized how much she is hated in the Arab World until now. I guess I have been away from the Middle East for a long time and now I’m no longer connected with the "Arab street." However, I’m not backing down. I’m someone who believes in the individual’s freedom of choice. By that I mean a choice that stands on its own that is not influenced by the preference of a community or society. I’m at a stage of my life where I no longer want to chant the same song with a familiar crowd. I want to chant my own song and make individual decisions. So for that I say, go Hillary.