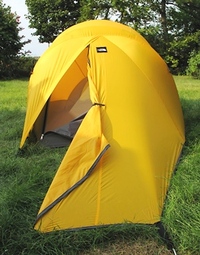 In preparation for our much anticipated camping trip up amongst the Blue Ridge Mountains on the Skyline Drive [pic] at the end of this month, the husband wanted to try out a brand new tent (one he’d bought years ago but never used) by camping out in the backyard at his parents’ house. He told me the idea and I liked it. So, last weekend, we brought our gear (two sleeping bags, two pads) and headed to the Shenandoah Valley, where we got the tent out of the attic and set it up in the backyard.

To increase the camping flavor of our adventure we decided to watch the documentary Grizzly Man while settling into the tent before we slept. It was fun, well except for the fact that the movie freaked me out a bit. It’s a real-life story about a man who gets eaten by a grizzly bear while camping in the wilds of Alaska. I’m pretty sure there are bears where we are going to camp but, according to the husband, they are "small bears" that you try to ignore if you ever run into them. Of course, this did not make me feel any better about the possibility of a bear attack, but I’m up for adventure.

I was also surprised when the husband told me that backyard camping is pretty common, often done by children seeking an escape from their parents’ house. Mom Tynes shared her backyard camping adventures from when she was young; she’d even craft a stove and cook! I had no idea. The American lifestyle never ceases to amaze me.