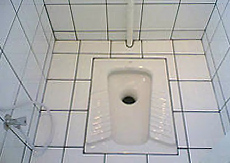 While on the subject of all things Turkey, Muscati & wife posted a picture of this toilet they found in a newly remodeled building in Muscat.

For those that are not from this part of the world, this is what we commonly refer to as a "Turkish toilet" and it can still be found in a number of public bathrooms across the Middle East. And yes, it can be still found in Turkey. I came across one in Istanbul nearly two years ago.

I’m one of those who is totally grossed by this "hole" and wish they would stop making this monstrosity. Read the comments as well, they are eye-opening and very detailed 😉 I hope this didn’t
gross you out 😉 I just thought that this "hole" was worth highlighting. Enjoy!