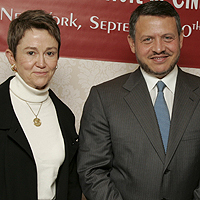 Thanks to the blogosphere, I’ve found out about an amazing cinematic project that will be established in Jordan. It is the Red Sea Institute of Cinematic Arts (RSICA) based in Jordan’s Red Sea resort town of Aqaba. I first heard about this great project on Laith’s blog and it really made my day knowing that such a highly needed institute would be established in Jordan. Kudos to all those behind it.

However, the announcement of this project is already creating controversy in the blogosphere. The reason stems from a statement by veteran filmmaker Stephen Spielberg, who will be involved in the project:

When His Majesty the King approached me on the subject of a Jordan-based, world-class film school serving every country in the Middle East, including Israel, I immediately saw the importance and significance of such a venture for the people and the future of the region. I knew as a trustee of USC and a member of the school’s Board of Councilors that the university had the exact expertise he needed for this incredible initiative.
Source: [University of Southern California]

Some were not happy about having Israelis involved in the project. One anonymous commentator on Ameen’s blog said:

I read what blogger Laith Majali posted about the film school and it said the school is also open to Israelis. Imagine, sitting next you will be an Israeli who is an IDF reservists and who may have killed or maimed an Arab few kilometers away from the film school. And then we in Jordan will help him make films about evil and terrorist Arabs. This is like Israeli film schools admitting skinheads and neo-nazis. Will we go along with anything if the price is right?

Another commentator on Laith’s blog said:

"… world-class film school serving every country in the Middle East, including Israel" The New Middle East? You can count me out.

Another commentator on Laith’s blog going by the name of Shlomo said:

Thank you. I can’t [wait] to learn filmmaking in Jordan to make films about terrorist Arabs.

Regardless of the controversy, I see this project as the materialization of the dreams of so many aspiring Jordanian and Arab movie makers. I am excited.