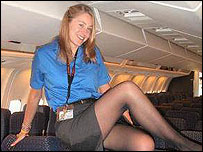 A US airline attendant is fighting for her job after she was suspended over postings on her blog, or online diary.

Queen of the Sky, otherwise known as Ellen Simonetti, evolved into an anonymous semi-fictional account of life in the sky.

But after she posted pictures of herself in uniform, Delta Airlines suspended her indefinitely without pay. Ms Simonetti was told her suspension was a result of “inappropriate” images. Delta Airlines declined to comment.

I personally think bloggers should refrain from writing anything relating to their jobs. Besides the fact that such behaviour is not professional, it can really get you into trouble. And seriously, why would you blog about your work in the first place? Are not blogs supposed to be some sort of an escape from our daily routine.